These intricate hand-coiled Mexican crafts have a rich history within the Mexican peninsula, and the ceramic art can be found throughout the country. Although numerous cultures throughout the world have a Tree of Life concept, this tree sculpture has multiple themes and a comp

lex history that makes it an integral part of Mexican folk art.

If you visit Mexico City or other parts of the state, be sure to stop by a local shop and see how artisans craft authentic Arboles de la Vida sculptures. Many visitors to Mexico are buying and using these fascinating clay sculptures for aesthetic flair in their homes. With multiple decorative options and breathtaking themes, these items are sure to spark a conversation among guests.

What is the Mexican Tree of Life? 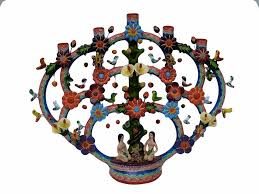 The Arbol de la Vida is a pottery sculpture shaped like a candelabra that originated in Izúcar de Matamoros, Puebla State. It contains clay replicas depicting religious themes related to the Biblical Tree of Life and the story of creation. Trees of Life familiarized the indigenous population of Mexico to Christianity via the charm of folk art pottery.

The pieces are brightly colored, include incense burners, and incorporate natural elements like flowers, leaves, animals, and branches. The Mexican Tree of Life follows religious themes or depicts the imagery of Adam and Eve, the Garden of Eden, and Archangel Gabriel. Nowadays, some people use it to commemorate their Indigenous Latin American roots and culture.

Although the concept originated in Izucar de Matamoros by Aurelio Flores, style developments and additions to the tree came from Acatlan and Metepec. With every new theme and idea, the clay sculpture that Aurelio Flores made grew increasingly popular. It first spread to Metepec, then the rest of Mexico, and finally, worldwide.

These days, crafters create themes depending on their clients’ demands. Examples include the Nativity Scene and Day of the Dead art, in addition to custom orders.

How does a Tree of Life look? 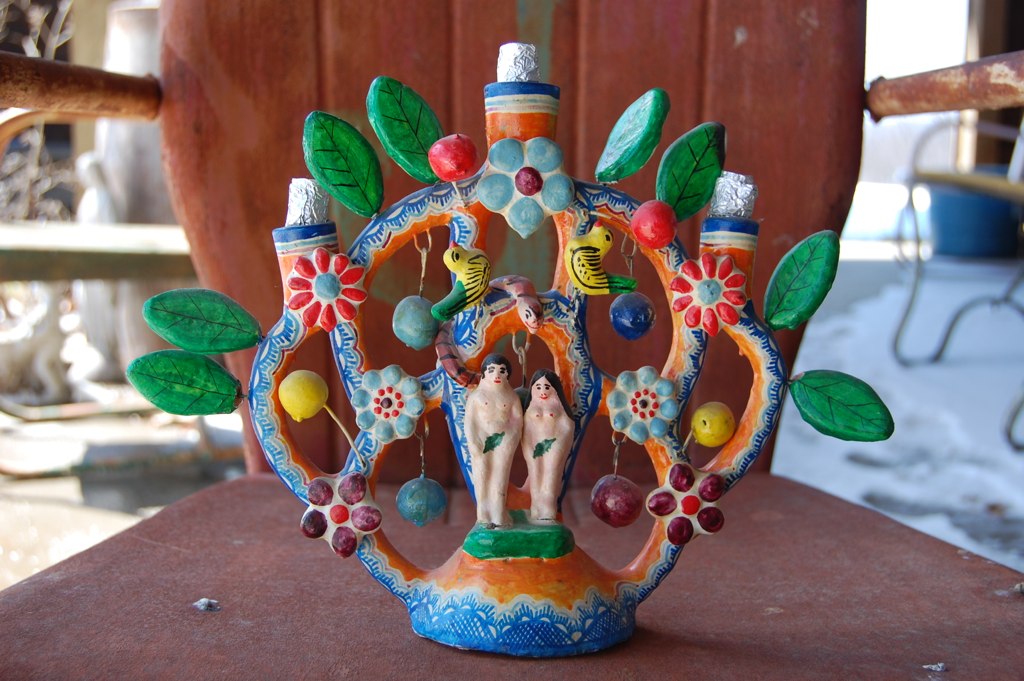 The tree comes in different shapes and sizes depending on the theme and the complexity of the work. Some Arboles are only a few inches long, while others can reach several feet. Artisans paint the sculpture with vivid colors that accentuate the theme and captivate onlookers.

You can choose an Arbol that looks like a blooming bouquet, but not all of them are flashy and “loud” in the aesthetic sense. Others are more subdued and contain intricate designs, snaking branch vines, and captivating characters that tell a story. The trees can be as glamorous or as understated as the artisan wants, and there are no special rules that go into crafting their dimensions.

Hang the sculpture on your wall or place it as a primary decorative piece in a room. Since these trees come in many colors and styles, you can find a unique piece in shops or online that suits your décor.

The price depends on the materials, weight, style, and work that the crafter put into it. If you are looking for custom made work, you may pay more than a pre-made model. Contrary to popular belief, these trees are not just available in Mexico, and you can order one online from a reputable seller.

If you want to go through the online route, we encourage you to shop from a native seller. Not only will the piece have a more authentic history behind it, but it will also help support the work of artisans who take pride in their native roots and traditions.

Is the Arbol de la Vida similar to Trees of Life in other cultures?

The Biblical-themed Mexican pottery tree of life is not the same as that of other cultures. It has a relatively recent history and includes a mix of indigenous and external influences. Moreover, sacred trees in non-Mexican cultures usually have one shape and story, while the Mexico Arboles de la Vida has a colorful history and comes in numerous forms.

Since the trees make frequent appearances in Day of the Dead festivals and other local celebrations, it’s safe to say that the Arbol is a uniquely Mexican creation with roots and history from the peninsula. They share important information related to the local culture.

What is the significance of the Arboles in Mexico?

Before Spanish colonizers came to what is now Mexico, indigenous groups followed their traditions and revered a tree called La Ceiba. The tree held significant religious importance to the Mayas.

Natives believed that La Ceiba incorporated earth, air, fire, and wind elements and existed in the astral plane. The Book of Council, the Maya’s holiest book, mentions La Ceiba as a sacred tree.

Although modern sculptures are not the same as depictions of La Ceiba, trees in Mexico state still have a spiritual significance. The roots of Arboles de la Vida date back thousands of years, and they are a fascinating link to Mexico’s indigenous history.

Does the Mexico Tree of Life have to do with religion?

Mexico Trees of Life do have religious significance for some, but they are not strictly religious items – they are Mexican ones. Arboles de la Vida include themes that have traditional influence in Mexico, such as the Day of the Dead. The clay pieces can look like anything the crafter wishes, from images of flowers and animals to scenes of traditional life in Mexico.

When did Mexican folk art start?

The history of Mexican folk arts dates back thousands of years before colonization. As indigenous people started settling in communities 3,000 years ago, they wove clothes and created pottery, art, and utensils for ceremonial and everyday use. While their art was functional, it also paved the path for the more intricate designs and craftsmanship.

With time came developments in crafting methodologies, including better materials to produce daily necessities. This new information and shift in lifestyle allowed people to create art for leisure, not just tools for survival. Today, several local groups are working to keep Mexico’s folk art alive and thriving so they can pass it on to the upcoming generation.