As with all food cultures, Mexican food is ever-evolving. The country is enormous, and it’s composed of many regions, each with its own staple foods, specialty dishes, and unique ingredients.

Food in Mexico is a celebration in itself, the most special moment of the day is gathering around the table and going out on Sundays to grab a snack or to enjoy local street food is customary.

Mexican food is better known for their savory dishes: tacos, enchiladas, and mole are recognized worldwide, but people in this country have a very peculiar sweet tooth.

Mexican sweets are immensely varied and come in all shapes, flavors and colors. From dried and candied fruits to dairy-based candies, from spicy treats to ice cream.

The weather in Mexico is more often than not warm, which makes popsicles, ice pops, and ice creams coveted snacks. This is all you need to know about Mexican ice cream and the mysterious Mexican fried ice cream.

As with any other food category, Mexico has a universe of frozen and cold treats, but we can break them down in four: Paletas, Nieves, popsicles, and ice cream.

Paletas are ice pops. Blocks of flavored ice solidified around a wooden stick that serves as a handle. This treat is not unique to Mexico, but it might be its best rendition around.

Mexico is a developing country, and ice pops are cheap. That, while adding that Mexico has a colorful bounty of fresh fruit, means that paletas are not only economical, icy snacks but are made with the finest, ripest fruit on the planet. Water-based or dairy-based, paletas are a real treat.

Nieves are like sorbet. These water-based ice products are made by freezing flavored water while stirring to avoid large crystals to form (this is often done manually in wooden vats.) The result is naturally flavored snow. Again, the quality of the produce, from limes to strawberries, makes nieves an extraordinary product.

Popsicles, which are basically clear plastic bags filled with flavored ice, are often homemade and sold outside schools or in parks.

Ice cream is different, it’s a modern cold dessert brought from Europe to Mexico at some point in the troubled history of the country. This dessert treat is always dairy-based and has a creamy and silky texture. Not very different from ice cream from any other place in the world, it has gained a place in people’s hearts. It is now served in traditional paleterias and heladerias along with the other icy treats mentioned above.

The Birth of the Mexican Fried Ice Cream

Migration from Mexico to the United States, both legal and illegal, has taken place for centuries. The United States is home to the largest Mexican community outside of Mexico.

People travel light when crossing the border looking for a better life, but they always take with them their traditions and love for their native food.

Mexicans arrived at the US and began cooking their family recipes with American ingredients, the food transformed, and a new cuisine was born. One of nachos, melted cheese, hard shell tacos, and fajitas.

Mexican restaurants thrived in the states since the 1920s, and although the food wasn’t anything like the one back home, their dishes became a synonym with Mexican food. Chi Chi’s restaurant, a chain of Mexican-American food, was founded in 1975 in Minneapolis, and it wasn’t long before they had hundreds of locations throughout the country.

The good folks at Chi Chi’s specialized in fried food, and somewhere in the eighties launched a dessert that would change the way Mexican food was perceived forever: the Mexican Fried Ice Cream. God bless Chi Chi’s.

A large vanilla ice cream scoop is breaded with corn flakes crumbs, flavored with cinnamon and deep-fried for just a few seconds to get a crunchy, golden-brown exterior without melting the cold core. It’s then served on a hardened tortilla bowl, embellished with silky whipped cream, drizzled with honey and topped with a cherry. It sounds lovely, isn’t it?

Probably inspired by the Baked Alaska Dessert invented around the same time, this new dessert gained a spot in history, in the most unusual way. 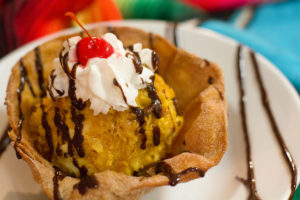 You didn’t think we’d give you a story lesson without teaching you how to make a delicious Mexican frozen treat, did you? That wouldn’t be fair at all.

This recipe is influenced by the original Chi Chi’s recipe; if done right, it will bring enticing memories of the now gone but never forgotten Mexican food chain.

Good food can come from anywhere, even from unexpected places like Minnesota. The Mexican ice cream dessert is now served all around the earth. It is a reminder that food, when done right, doesn’t need a cultural identity tag. It’s okay for food to just be food. Fried ice cream is delicious and that’s that.

Find more interesting stuff all over the world at Passion Roamer.